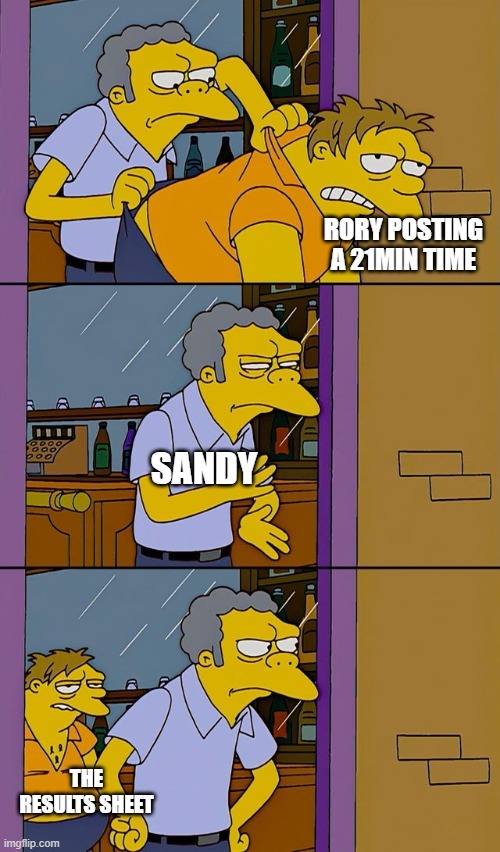 Week 9 and another week of solid numbers. The forecast was such that it played a part in me not wanting to race and in years past a similar forecast would limit numbers to the mid-teens max. Not 2021. 38 riders signed up and 34 took part on the night.

The rain managed to stay away, at least in the relative comfort of Tranent it did. Not a sentence I’d imagine ever typing. Whereas once you crossed into the wilds of Gladsmuir, the rain had definitely hit. Riders were having to take the hokey pokey turn suitably gingerly to avoid having one foot clipped in and one foot out, in out, in out.

In the spirit of these reports it’s now time to switch to Dan’s life blog. The forecast gave me suitable cover to pull the plug on my racing this week, whereas the main reason is, that I am just wiped. A man spinning many a plate. At the moment on any given day I could be doing my 9-5 job, preparing and doing the freelance lecturing I do, organising this series, organising the CTT Scotland Series, oh and planning a wedding. It’s caught up with me a smidge. I suppose in the spirit of the Olympics, I feel like Michael Phelps having to juggle the 43 swimming events he used to compete in, the difference is that I don’t have Phelps’ medals, success, six pack or 12,000 calorie diet.

Maybe as well this week didn’t start on the best of notes. My morale definitely took a huge dent once I awoke on Monday morning to find out that Van der Poel had crashed out of the Olympic Mountain Biking. Oh bae.

I am pleased however that #compulsoryweddingchat is proving useful. Another recently engaged gentleman, Euan Baxter, (congrats!) who was on marshalling duty last night told me the chat is appreciated. I surely hope he is taking advantage of the Giant Trinity Wedding Cost Matrix™.

Thankfully last night there wasn’t the – are you race number 5, 34 or 47 drama like last week. We only had Johnny Noblett sign on as rider 25 but go as rider 39. But this was a pre-planned outcome. Let’s see what next week brings.

To the racing! We had two under 18s racing last night. 12-year-old Kasey Park of ERC who finished in 32:03 and Cameron Adam, aged 15 who races for Musselburgh Roads CC, finished 12th overall in a time of 23:59.

There were 3 other women racing last night. The quickest of whom was Hazel Macleod, who finished 13th overall in 24:00. Hazel did raise an eyebrow from myself when she finished her race and then asked if I’d still be there in 20minutes. She asked because she then shot off on a run. Some may see this as strange behaviour, however Hazel is competing in the Tokyo Paralympics as an athlete guide in the Triathlon. I myself cannot see any better preparation for the world stage than the Tranent Midweek TT. I hope you’ll join me in wishing me the best of luck to Hazel and the team for when they compete in August. The 2nd fastest woman was Sarah Scott of ERC in a time of 25:08 and 3rd was Yolanda Solans who finished in 27:20.

Of the early starters we had Paul Rayner, who held me at cleat-point to ensure I will mention his PB. Paul was aiming to beat his previous best of 30:03 and did so by posting a 29:42. Paul joined his first ERC TT race a handful of weeks ago but has been ever present since, a very positive presence and has even volunteered. People like Paul are the reason the series keeps running. Paul, you can leave the money in a duffel bag behind the Eskbank Road bus stop please.

There were also a handful of series first timers last night. Kenneth Sneddon went of 2nd, was 25th overall and the second fastest road biker in a time of 26:25. I asked him ‘what’s the frequency Kenneth?’, I got a blank expression in return – maybe he thought I meant watts or something. Another series first time and fastest road biker last night was Jason Moffat, 24:56. Everytime I’ve seen Jason’s name I keep misreading it as Jason Momoa. I couldn’t recall if Jason was a 6-foot 3, ripped, tattoo laden beast of a man or not. But if Aquaman himself was racing last night it would make sense as to why Tranent stayed dry.

A few weeks ago, we had Lewis Hutchison conduct a rolling start, last night we had Pierpaolo Sidoti attempt something similar. It didn’t turn out as a rolling start mind you but more of a bucking bronco start. In hindsight I couldn’t figure out if it helped or hindered his effort. Either way I did have a drafting complaint directed at Pierpaolo last night, so he’s on my watchlist. Plus, he forgot a pen. A yellow card for sure.

Let’s get to the business end of things. It was a comparatively slow night as you’ll see from the winning time compared to last week. In 10th we had Steve Canney in 23:19. 9th was Mark Anderson of Musselburgh CC 23:09. 8th was Chris Stewart of Ronde CC upon his DIY, 3d printed, home painted lockdown project TT bike. It was Chris’ first time out in 2021 and he finished in a very respectable 22:58. 7th was Ian Dobbie of West Lothian Clarion, 22:39. 6th was Leah Parry in 22:08, Leah got held up by a learner driver, caravan, tractor, OAP on a mobility scooter and at a level crossing. Some of that may be exaggerated.

Entering the top 5 - Oliver Teenan was 5th in 21:51. Alan Dean was 4th in 21:45. 3rd, and his first series hit out of 2021, was Aran Gannicott of Gala CC who finished in 21:28. Now the top 2, who were separated by the barest of margins! If you recall England winning the Cricket World Cup in 2019 you may get that reference. Sandy Waller sensing blood and 40 points, finished in 21:03 however Rory Downie pipped him to the post in 21:02. Since Sandy doesn't have Strava I couldn't use it to confirm if he did beat Rory as he suspected he had done. You know what they say - if it's not on Strava.....

Many many thanks again to our volunteers, Alan Burke and Simon Russell for timekeeping. Alan is very much becoming my right hand man and the reason timekeeping or marshalling is done smoothly each week. So please send a big thank you to Alan. Thanks also to Colin Sills for the signs and marshalling and Euan Baxter for marshalling in Macmerry. I did the start area stuff, so thanks to me too.

Full Results here, I have shrunk the picture a bit, because I did realise when you originally opened the results page you’d be greeted by a Faceful of Howie - Week 9 Results

Hope to see you all next week. One more 10 until we mix it up for a few weeks of Yaks and 5M TTs.