ERC's Chairman Simon Bullock picks up a top-10 at Tour of the Lammermuirs! 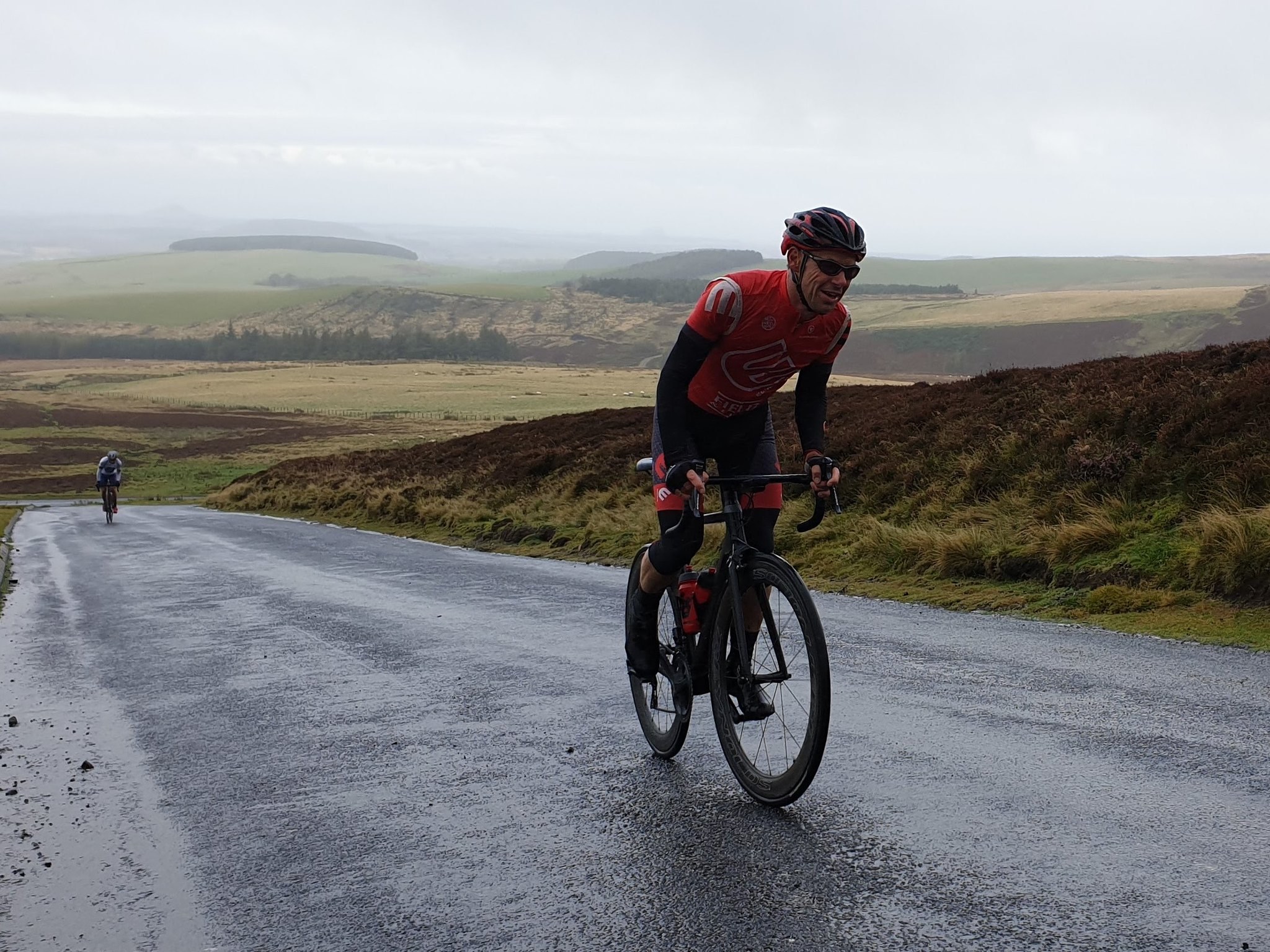 Simon Bullock, the club's long-standing (or some may say suffering) Chairman topped off a great season of racing with an 8th place at the Tour of the Lammermuirs. The race, ran by VeloClub Edinburgh had its route altered due to flooding. Here is his race report:

During the race briefing, it was confirmed that the usual, published race route had been amended due to inclement weather. A ford en route now resembling a river was thought to be too dangerous to race through. The result was that the loop down, around and back over the Rigg was taken out and instead, two extra laps of the Gifford circuit added in, with the finish now just before the cattle grid at the top of the Rigg. There was a mixed reaction to this as some riders were glad of the reduced climbing whilst others realised immediately, that this meant some fast laps of the Gifford circuit from the gun. Also advised in the briefing was that due to an abandoned car just after the 90-degree left-hander at the bottom of Cockles Brae, the race would be neutralised until after the car, allowing us to see it before we had to race by it a further 5 times.

What wasn’t mentioned at the briefing was that the windows had been shattered, spreading glass all over the road around it. This was unfortunate because as soon as the flag was pulled in (as we passed the car) and the race commenced proper, there were two riders, ERC's Colin Jackson and another that immediately punctured. Colin managed to get a wheel change, but I believe the other rider was refused service as he had brought no spare. A long walk back to the strip for him then. Actually I think he rode back on the rim, which may turn out to be a very expensive 5 seconds of racing for him. A lesson for us all I think...

By now racing was on, and as expected it was fast and furious (without the film crew and road closures) from the off. A few early attacks came to nothing, and it all seemed to stay together until the first climb, through and out of Bolton, where a tasty wee break of about 12 riders got away. I was still in the middle of the bunch at this point wondering when I might move up to the front. I guess the decision was made for me, so I started to move through and got to the front 5 or 6 riders. I realised that some key riders fancied for the overall win (Tom Merry and Julian Roche) were no longer in the bunch and so this particular break was likely to go all the way, and I had missed it. As we came out of the woods and into the headwind on the (B6355) East Soulton to Gifford road I saw an opportunity to try and jump across. It could be a futile and energy-sapping move, just dragging the bunch forward or it might actually work. Only one way to find out (regret not what you do, but what you don’t do).

On the descent past the hairy house, I attacked into the wind, knowing from the regular Saturday bunch ride, that I can carry myself up the other side pretty well. As I climbed up the other side, almost in touch with the breakaway, I glanced over my shoulder and saw that a couple that followed had already given up, but one other (Ben Dixon) had made it with me. The two of us chased a little more and managed to latch on to the break just before the descent into Gifford. Perfect I thought, no one needed to know that I hadn't been in the break from the start!

Now in a breakaway that was furiously trying to put time into the bunch, I wondered what on earth I was doing there! I took a breather and then joined in, approximately 12 of us working in a chaingang to the finish, piece of cake I thought, no different from the 09:30s. Boy, was I wrong! Yes, it was a chaingang but this time the gap and who stayed away really mattered and no one was letting anyone forget it! There was the token shouty one, moaning about folk not taking a turn, whilst he himself was missing a couple, the super-strong guys chomping at the bit to attack the rest of us, and the old guy (me) wondering how and why he ended up in the break. It was around about this time that I heard a rubbing sound coming from my bike. I reached down to loosen the brakes off the front wheel, at which point I noticed that I had put my wheel on back to front. The skewer lever was on the wrong side. With directional tyres, I now started to panic. Would the handling be impaired, would I have less grip, greater rolling resistance, etc. These were the last thoughts I needed at this point in the race…I loosened the brake, but the rubbing sound did not go away. I looked down at my rear wheel to do the same there, but the fear of ripping my fingers off in the spokes led me to just leave it alone. Hopefully, the noise was just a bit of sludge from the road that would fall or wash off soon enough*.

We stuck together for 4 more laps, with an odd flutter here and there from those out to attack/test the others. On the 4th lap, two riders (Tom and Julian) managed to get away and form a reasonable gap. It took the rest of us almost a full lap to reel them in. So all back together as we started the 5th lap. It was halfway around the fifth lap that a sole attacker (Adam Wild) jumped away and got a big enough gap to look like he was going to solo to the finish (a big ask, but who knew). A little later on that lap, another attack from the shouty guy took off on the (B6368) climb approaching the (B6355) East Soulton to Gifford road, and that is when the elastic snapped for me.

I was done in terms of staying with the break but was sure I had enough left to stay out of sight from the chasing bunch. Luckily for me, Ben Dixon had also had enough at this point and sat up too. Ben required only a single point to get his 2nd cat licence, and all I wanted to do was finish as high up as possible (too late in the season for me to gain enough points to make a difference now). A quick mental calculation suggested that there were fewer than 12 ahead of us up the road, so all we had to do was not get caught and Ben would be guaranteed 2nd cat license. We joined forces and rode the last lap and a quarter together to give us the best chance of not getting caught (which with only two into the strong wind was probably harder than if we had stayed with the break).

We never saw the break again, but as we completed the last lap and came up the last climb towards Gifford we did catch a rider (Cameron Blake) that had dropped back from the break. As we passed him, he made no attempt to hook up with us, so we rode on, kind of pleased that this was one more step up on the overall standings for both of us. Unnoticed by us, another couple had been dropped before we had, so we were now actually riding for top 10 positions. The only thing in our way was the final ride out of Gifford and up the Rigg (and of course the chasing bunch, that were still an unknown distance behind us).

Even though there were 2 of us, it still felt like a long and lonely ride out to the Rigg. The wind was a block headwind, and our legs were tired from the earlier laps of Gifford. We knew the bunch were somewhere behind us but had no idea how far (or how close) they were. We took turns and encouraged each other to carry on. Ben’s 2nd cat license was at stake, and I just wanted to get to the finish as soon as I could. Lots of looking back to make sure we weren’t gapping each other, and also to make sure the bunch weren’t catching us.

As the final climb came in to view, it still looked like there was a long way to go. As we started to climb the precursor to the steepest section, a look over the shoulder revealed car headlights and riders coming into view. It was the bunch, but they looked far enough away that we would make it to the finish without them. I shouted to Ben that they were in view, and to just keep going to guarantee the points he needed. I then just pedalled at my own pace to the top of the 17% part and carried on the long drag to the finish.

It was no comfort seeing our earlier break companions riding back in the other direction, after finishing a good bit ahead of us. I crossed the line (in 8th place) with nothing left in my legs, at which point I saw and heard my soigneur (Mrs B), there at the finish to cheer me over the line. I am not saying that I didn’t appreciate the cheering, because I really did, but it was the thought that I no longer had to ride back to the strip that was uppermost in my thoughts! Thank you, Tori, for being there when I needed you!

Ben crossed the line (in 9th) a few seconds after me. We shook hands and waited for the bunch, who were by now not that far behind us. This no longer mattered as we had finished ahead of them, Ben had sealed his upgrade to cat 2, I had a lift back to the strip, and now it was all over until 2020…

*I discovered as I put my bike on the car that the rubbing noise was indeed my rear brake catching on the rim – Maybe without this I would have won. Yeah right!!

Finally, just a huge thank you to all those at VeloClub Edinburgh for organising and volunteering to put on a great (and I believe accident-free) event.